Applying science to your bottom-line! info@ScienceofBusiness.com

and our Pricing Guru!

Since first learning of the Theory of Constraints in 1995, Brad has had significant success implementing at his Denver-based company, Adstick Custom Labels.  Adstick retained the services of several of the leading TOC practitioners including Lisa Scheinkopf, author of ‘Thinking for a Change’.

After only a few months’ effort and rapid success, Adstick and Brad were profiled in the July 1996 Entrepreneur magazine article “Full Steam Ahead”.

By 1997, Adstick was highlighted for its best TOC practices by APICS.  The annual APICS Constraints Management conference was held in Denver so that Adstick could host the tour for the conference.  Dr. Eli Goldratt came and provided the recommendation for Adstick to now improve its marketing and sales, and provided the resources of the Goldratt Institute to support the process.

Following the tour, APICS was so pleased with the tour and Dr. Goldratt’s involvement that Adstick and Brad were again profiled in an APICS magazine article entitled “Constraints Management from APICS—The Key to Success”.  A short time later, after the cameras and crew departed, APICS featured Adstick and Brad’s story on a big 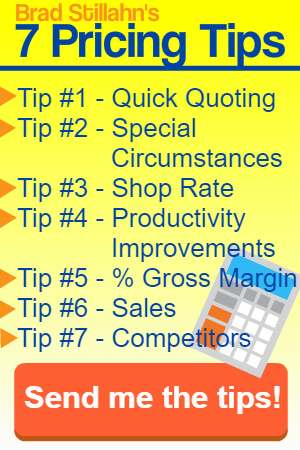 From 1996 through 1999, Brad participated in a traveling road show of seminars for both Chesapeake Consulting and Goldratt Institute to provide the example of an enterprise-wide success story, as well as a follow-up results update presentation at the 1998 APICS conference.

With Adstick’s profitability secured, Brad’s goal of being an owner-investor rather than an owner-operator was met by 1999 when he turned over the management of the business to a General Manager, and semi-retired.

In 2003, Dr. Goldratt announced ‘Viable Vision’, a process “to bring a company to have, in less than four years, net profit equal to its current total sales”.  Motivated to bring that reality to other business owners suffering with results less than their expectations, Brad combined consulting efforts with Dr. Lisa Lang, President of The Science of Business, to develop long-term holistic TOC Viable Vision relationships worldwide.

Before becoming the owner of Adstick in 1990, Brad was Director of Corporate Marketing for Menasha Corporation, a large privately-held, multi-divisional company based in Wisconsin.   He previously held a variety of management responsibilities at Owens-Illinois, a publicly-traded multi-billion dollar packaging company, including marketing, sales, corporate planning, finance and accounting, and logistics.  Brad holds the TOCICO certification as a TOC expert, and APICS certifications in Production and Inventory Management (CPIM) and Integrated Resource Management (CIRM). He received his MBA from Washington University in St. Louis.